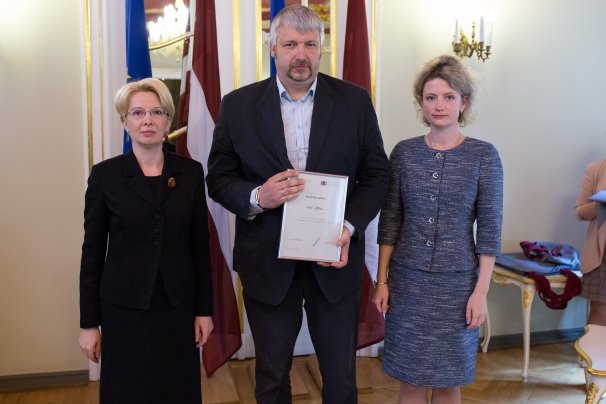 On Friday, June 26, the representative of the Board of Cannelle Bakery, Bruno Ansons, received a certificate of merit at the House of Parliament in appreciation of Cannelle Bakery being one of the supporters of the Latvian Presidency and offering their goods and services free of charge. The Speaker of the Parliament, Ināra Mūrniece, thanked the entrepreneurs: “Very soon, companies and organisations, as well as a large number of professionals, will be able to add to their portfolios the well-deserved accolade of having helped prepare and support the presidency. Yet, the largest benefit is the confidence. For diplomats, it is the confidence to be able to support this challenging exercise at a very high level. For our Latvian companies it is the confidence in what they do, in their country that has achieved a complicated task that is a boost to its reputation.” I. Mūrniece received the supporters of the presidency together with the Director of the Secretariat of the Latvian Presidency of the Council of the EU. (Photo: Ernests Dinka, Saeima Chancery).
Return to start